Vaxxas' Nanopatch is the future of needle-free vaccine

Vaxxas' Nanopatch is the future of needle-free vaccine 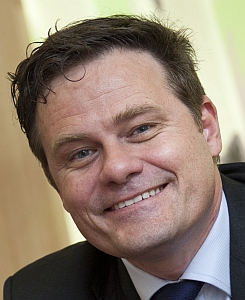 Professor Mark Kendall, co-founder and director, Vaxxas. Prof Kendall and his team invented the Nanopatch technology at the Australian Institute for Bioengineering and Nanotechnology, University of Queensland

One of the challenges in the R&D of next generation vaccines is the development of a delivery technology that will be more efficient, effective and safer than the conventional methods. Vaxxas, an Australian start-up founded in 2011, is working on one such technology.

Its platform technology Nanopatch, which emerged from the lab of Professor Mark Kendall's research group at the Australian Institute of Bioengineering and Nanotechnology at The University of Queensland, promises needle-free vaccine delivery that is quicker and more effective than conventional injections. It is a small silicon patch (1x1cm) that has tens of thousands of projections that are 200-300 microns in length.

"When you look at the Nanopatch, the projections are invisible to the naked eye. Vaccines are applied onto the Nanopatch in liquid form and then dried down, leaving the active components in a thermostable form on the tips of the projections," explains Mr David Hoey, who was recently appointed the company's first CEO. He added that the technology has "tremendous potential to improve the performance of a wide range of existing and new vaccines".

The University of Queensland's main commercialization arm, UniQuest, led the initial commercialization of the Nanopatch technology prior to the creation of Vaxxas in 2011. The first financing was in August 2011, where the company raised approximately $15.3 million (A$15 million) from a group of venture investors, including OneVentures, Brandon Capital, Healthcare Ventures, and the Medical Research Commercialisation Fund.

The Nanopatch is applied using a small spring loaded applicator that taps the Nanopatch onto the skin. It is painless and needs to be left in place for just two minutes and then removed. During the application process, the vaccine antigens are deposited directly in contact with the very dense populations of immune cells that reside just below the surface of the skin, provoking a very potent immune response. Mr Hoey says in a wide range of preclinical studies, it has been shown that the Nanopatch is so efficient in activating the immune response that as little as 1/100th of the dose delivered by Nanopatch can result in the same immune response as "full" dose by intramuscular injection.

Also, Vaxxas' proprietary dry-coating technology can eliminate the need for vaccine refrigeration during storage and transportation - removing the resource burden of maintaining a cold chain. "Leveraging both the potent immunogenic response and thermostability, Vaxxas is applying its technology to improve the performance of vaccines, with initial applications targeting infectious disease and oncology," says Mr Hoey through an email interview with BioSpectrum.

The company has also set up an office in Cambridge, Massachusetts and has signed a deal - its first commercialization deal since being founded - with pharmaceutical giant Merck for testing the technology on an undisclosed vaccine candidate. Under the agreement, Merck has an exclusive option to proceed toward clinical development for this undisclosed antigen and also has exclusive rights to develop two additional undisclosed vaccines.

Mr Hoey says the company does not plan to develop its own vaccines. "Vaxxas plans to work with the world's leading pharmaceutical companies to enable efficient delivery of their vaccines via the Nanopatch."

The company is reaching out to leading vaccine producers to discuss the benefits of the Nanopatch. "In this way, we believe the technology has the best potential to be broadly used across many different vaccines, reaching and benefitting the largest number of people," he says. The technology is currently in pre-clinical development and Vaxxas expects Nanopatch to be ready for use in clinical trials by 2015.