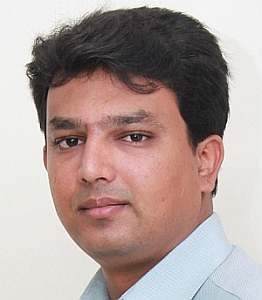 India-based start-up, eHealth Access (formely known as DialurDoctor) was established in the city of Hyderabad in 2010. Since its inception, the firm has revolutionized the healthcare space by giving a whole new meaning to the term 'doctor-on-call'.

Mr Jayadeep Reddy, founder and CEO, eHealth Access, feels that, "The future belongs to those who believe in the beauty of their dreams." The 28-year-old businessman strongly believes in this famous quote of Ms Eleanor Roosevelt. After graduating in Bachelor of Pharmacy from Osmania university, Hyderabad, Mr Reddy's first job was that of a field sales officer at Glenmark Pharmaceuticals, where he was paid a monthly salary of about $145 (Rs8,000).

After working here for over one-and-a-half years, he moved to Aditya Multi-Specialty Hospital, where he was the marketing manager. However, he always had an entrepreneurial bent of mind since childhood and was inclined towards business management since his graduation. Sensing a huge gap between patient-doctor communication, the then 26-year-old Mr Reddy launched Dialurdoctor.com. The company focused on developing new healthcare eco-system through advanced tele-medicine technology in order to create a bridge between patient and healthcare practitioners. Patients could connect to a specialty doctor by calling 1800-1030-365 at anytime of the day or night.

What started with just a tele-doctor concept, has now diversified into video, chat and touch screen enabled kiosks. Mr Reddy, while talking about the idea of starting the company, says, "We started with voice solution where people could connect via phone. We thought that there should be other modes of communication and patients were also asking if they could communicate with the doctors face-to-face. We then diversified and raised funding and formed the new entity called eHealth Access. Once we raised funding, we started working under the banner of eHealth Access for all our solutions."

The company now has tie-ups with 211 health specialists and 250 doctors. Mr Reddy recalls, "We were a three-person company when we started and within a year, we recruited 18 more people. We grew to become a 40-member team."

Start-ups often face severe difficulties in raising funds during the initial phases of their functioning. However, for Mr Reddy, this was not the case. He mentions that "Raising funds was not so difficult. As soon as I had the business plan ready, I got the funding from Mr Ramprabhu T K and one more NRI investor." Mr Ramprabhu is presently the director of eHealth Access and heads the R&D team of the firm in Hyderabad.

The challenge for Mr Reddy was that the technology that he was introducing to the country was fairly new and people found it difficult to accept the technology. "One of the main challenges was to make the people understand that our technology, market the same and at the same time, develop the technology with a very small team," adds Mr Reddy. The technology development for the voice platform for DialurDoctor took six months.

Another challenge that Mr Reddy faced was that starting the company with a disruptive business model (a model that creates a new market by applying a different set of values, which ultimately overtakes an existing market) was not easy in India. "It is rather difficult to get investments when you enter the market with such a business model, but thankfully that was not the case for us. We rather had the difficulty in convincing our corporate clients about our services and they were skeptical in using them. But when we gave trials, they understood that our system was not a hoax and realized the benefits of such services for office employees."

Towards the end of November 2012, the company launched India's first Virtual Medical Kiosk in Bangalore. Through the kiosk, patients and doctors can communicate through phone, web-cam, video conferencing, messaging or chat. The kiosk is embedded with a touch screen system, audio-video capabilities, diagnostic equipment, scanner and medical management software that is capable of recording personal health data in order to give a real-life experience through a proprietary platform that has been developed by eHealth Access.

The company plans to launch these kiosks in rural and in corporate settings. About the marketing strategy of the kiosk, Mr Reddy explains, "In the rural segment there is no limitation because one needs 1 kiosk per 1,000 people, so it depends on the initiatives taken by the governments. Corporate is an open market, which we can tap immediately." The cost of the kiosk is about $6,300 (Rs 3.5 lakh) and the company has several corporate plans whereby companies will pay annual subscription fees for each employee. The fees would ranges from $11 to $18 (Rs 599 to Rs 999).

Talking about the idea behind the kiosk, the CEO of the company, says that, "We already have corporate wellness partnerships with several companies. While we provide services to organizations, where the employee can dial a number and reach a doctor, we felt that apart from just providing consultation, there was a need to have some basic diagnostic to be done regularly."

"Initially we thought of setting up an open-air kind-of-device, like an ATM machine where the office employees can walk to and connect with the doctor. However, we decided to keep the setup personlized because when people connect with the doctor, they disclose personal information and that's how we got the idea of the kiosk," adds Mr Ramprabhu, who worked on the kiosk for about a year and has filed a patent for this.

The company has been climbing the success ladder and it managed to make $91,300 (Rs 50 lakh) in just one year since operation. The company serves patient round the clock from Jammu & Kashmir to Kanyakumari (across the entire length of India) and has over 40,000 customers. Moreover, around 2,000-3,000 customers are added every month.

When asked about the future, Mr Reddy says, "We are in a $40 billion healthcare market and 40 percent of that accounts for primary and preventive healthcare. Telemedicine is an emerging solution which can address the primary and preventive care segment. In the next two-to-three years, we are expecting to reach entire nation. In 2013, we are planning to launch about 150 kiosks in the southern part of India alone."