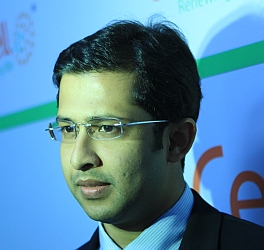 This test is done entirely in a non-invasive manner thereby making it safe for the baby and is simple to implement in an everyday healthcare setting. The BabyShield screening program is performed using a few drops of blood collected from the baby's umbilical cord at birth and on the urine sample retrieved 48 hours after the baby's birth. The test results are available within a few days of collecting the sample, aiding early diagnosis and timely treatment thereby improving a child's chances of loving a healthy and normal life.

Newborn screening is recognized by health experts as an essential medical test, as it can help identify children who may be born with such conditions even before they become sick. This enables parents to initiate early and preventive treatment thus safeguarding their children from severe harmful conditions such as mental retardation, physical abnormalities, bone deformity, and liver dysfunction.

In a survey on Smart Healthcare, conducted by BioSpectrum in the month of November, it was noticed that genetic diagnostics is one-of-the-fastest growing segments in the Asia Pacific. Newborn screening is one of the verticals of genetic diagnostics that is also picking up, although at a very sluggish pace. BioSpectrum connects with Mr Mayur Abhaya, CEO and managing director, LifeCell International, to talk about the company and the new service that they have launched.

Tell us about LifeCell and how it came into existence?
LifeCell was incorporated in May 2004 and was started by the founder of Shasun Chemicals. One of the directors of Shasun, Dr Jagdish Seth, is a member of CryoCell. He introduced us to the concept of stem cell banking and he wanted to venture into the biotechnology space. Previously, I was working with Shasun, handling its IP portfolio. In 2008, there was an opportunity in LifeCell, as the company was doing well. Since my father was busy handling multiple operations, I got an opportunity to step in.

What are the services that LifeCell offers?
Before I joined the company, LifeCell was a single product company offering only cord blood banking, a service which allows parents to store stem cells extracted from their baby's cord blood at the time of birth. These stem cells are collected immediately after birth and transported to LifeCell's lab within 48-72 hours. The cells are then processed and stored in minus 200 degrees Centigrade in liquid Nitrogen.
Once I was on board, we were able to expand the number of service offerings. We launched add-on services such as umbilical cord tissue banking.

Human blood is extremely rich in hematopoietic stem cells, which play an important role in the regeneration of blood and immune systems for the treatment of blood-related ailments such as leukemia and myeloma. The mesenchyme stem cells extracted from the umbilical cord tissue can be used for muscle and organ regeneration, including that of heart muscles, cartilages, and pancreas among others.

Although the real life use of mesenchyme cells for the treatment of diseases is currently more in its experimental stage, as compared to the use of hematopoietic cells, umbilical cord banking holds massive potential and we are looking into it. LifeCell is also the only company to offer menstrual blood stem cell banking, a service which was introduced in India in 2011.

We have recently launched BabyShield, our new born genetic screening service. Apart from this, we are also working on R&D programs to develop dendritic cell cancer vaccines. The lab work regarding for this is ongoing and we are in the process of building an in-house program for this. We hope to initiate human clinical trials starting next year.

Please explain the BabyShield program in detail?
BabyShield is the world's first painless and most advanced newborn screening program. The screening is done using a sample of the baby's umbilical cord blood and urine. The umbilical cord contains residual blood (cord blood) from which a few drops of blood is collected as cord blood spots in a special paper. This is a simple and safe procedure which is done within 10 minutes after the baby is born. This causes no harm to the baby, since the umbilical cord is already cut after birth.

The second part of the sample that is required for newborn screening is the baby's urine. It takes about 48 hours after birth for the baby to set its metabolism and to start urinating. The urine is collected in special filter papers provided in the Newborn screening kit, air-dried and sent to the lab in Chennai for testing. The collection procedure is simple and non-invasive as the filter papers are placed in the baby's diapers. Both the samples are sealed and sent to our center. Using these two samples, we then screen for 118 health conditions enabling early diagnosis and timely treatment thus improving the life of the child.

The infant mortality rate in India still stands at 47-per-1000 live births, ranking our country 153-out-of-200. States such as Goa and Kerala have already initiated newborn screening programs. Over the years several countries such as the US (in 2005) have made it mandatory for all states to screen newborns for 54 conditions by a particular method recommended by American Association of Pediatrics.

The technology offered by LifeCell is different from that being used in the US. The technology that is used in the US for primary screening is called MSMS or tandem mass spectrometry and is prone to false positive results. Once the condition is identified, majority of these conditions are then confirmed using GCMS technology.

What we have been able to do is to innovate and combine the GCMS technology with population based screening, thereby addressing the limitations with the GCMS technology. For instance, GCMS was not apt for automation. The throughput was also lacking in the GCMS whereby it can do only 50 samples. Our lab has been able to automate the reporting of result through software to decode the result. This reduces the expertise required to analyze the results and time of screening has also been reduced.

Urine sample contains urea largely. So how is it possible to utilize urine sample for screening for diseases?
Dr James Shoemaker, associate professor, Edward A Daisy Research Center, Department of Biochemistry and Molecular Biology, Saint Louis University School of Medicine, US, developed the technique of analyzing the urine for metabolites other than urea in 1989 through simple innovation.

What are the benefits of BabyShield?
BabyShield is the world's most advanced newborn screening program. No company in the world offers screening for 118 diseases. Around 111 diseases can be screened with urine sample and seven with cord blood.

Simple conditions such as galactosemia, a condition in which the body is unable to use the simple sugar galactose, is highly prevalent in India. In such a condition the mother breastfeeds the child only to harm the infant. Simple detection at the time of birth can diagnose such conditions and the baby's health could thus be improvised.

How long did it take for you to develop BabyShield?
It took about two years and a 12-member team to come up with BabyShield. This was championed by an IIM graduate. He was the project manager who came with an engineering background. We had the soft launch of the program couple of months back with hospitals. We have 400 parents who are using this service since September. We anticipate that we will be catering to 2,000 clients in a month by early next year and our target is to do at least 1,00,000 newborn screening within three years.

What is the price at which one can avail this service?
The price for BabyShield Newborn screening is set to around $90 (Rs4,990). This includes enrollment fee, cost of sample collection kit, collection charges, shipment, testing of cord blood and urine samples and providing comprehensive report.

May be $90 is a reasonable price for the rich and for the middle class in India. However, have you thought of the poor may avail this service?
We are looking to work with the government to initiate newborn program on a large scale. For example, at AIIMS, we did a program where we offered new born screening at half-the price. If more of such national programs are there, the costs will certainly come down.

Today the challenge is that healthcare is not the priority for the country. Less than one percent of GDP is being spent towards healthcare. It is not that we don't have that much money, we have the money and capacity but priority is not there.

Is LifeCell present in countries other than India?
We have a reasonable presence in the UAE. In Asia Pacific, the challenge is different. For example, although Singapore is the world's highest penetrate-able market for stem cell banking there are several people from Chinese origin and Malay origin who live there. This makes the market extremely diverse and we need to scale-up in order to provide services there. We have started our operations in Nepal and within a few months we will be beginning operations in Sri Lanka as well. Also, Bangladesh is within our radar.

The year 2012 has been fruitful for the company. What are your thoughts about it?
Yes, 2012 has been good for us and we have been able to achieve several milestones starting from January. We got the most prestigious AABB accreditation for cord tissue banking. American Association of blood banks (AABB) is an international non-profit body dedicated to developing the highest standards in blood and cord blood banking.

LifeCell became the first and only stem cell bank to possess AABB accreditation for both cord blood and cord tissue preservation. Then in March 2012, we established the 100th center in J&K, thereby expanding the services in 22 states and 80 cities in India and in August 2012, we crossed the 50k mark. We have a new mirror lab coming in Manesar, Delhi, which we are planning to launch before the year 2012 comes to an end.

What can we expect next from LifeCell?
At this moment, further penetration of stem cell banking is required in the country. What disappoints us is that even after eight years of being there in the country and with more than 20 players in the country, the penetration is very low. There are certain factors that limit the uptake. Cost is one of the them. The affordability has to be addressed and awareness has to be made. We are working on a program that will help us to scale-up significantly, and become 10 times larger than what we are today.