What are India's most eminent life science individuals saying about CSIR? 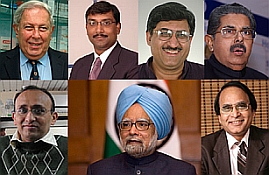 India's Council of Scientific and Industrial Research (CSIR), which was established in 1942 as an autonomous society and with 37 state-of-the-art institutes by Dr Shanti Swarup Bhatnagar, has come a long way since its inception 70 years ago and is considered to be one of the foremost research organizations in the world. Read what some of India's most eminent individuals have to say about the country's flagship science organization.

"I compliment CSIR for breakthroughs in advanced scientific areas that have the potential to meet the basic needs of our people."
- Dr Manmohan Singh, Prime Minister of India

"CSIR has transformed itself many times; yet its all pervading spirit remains unchanged and dedicated service to the nation and the amelioration of the conditions of citizens remains its guiding light. Young at 70, CSIR is pursuing the quest for inclusivity in many innovative and novel ways."
- Mr Valayar Ravi, former minister of science and technology, Government of India

"Under the current global scenario, our major challenge is to discover new drugs. CSIR has outstanding laboratories for chemical synthesis of new molecular entities. Our biology laboratories working with the chemical laboratories should be able to meet the challenge. However, future medicine would be largely based on cells rather than molecules. CCMB and a few other biology laboratories of CSIR are working on cell-based therapies including stem cells for diseases important to our country".
- Dr Ch Mohan Rao, director, Centre for Cell and Molecular Biology (CCMB), Hyderabad

"CSIR's relevance on the national scene has become even more pronounced as it is perhaps the only institution that so successfully straddles both fundamental and applications aspects of science. This is particularly so in the transformation of biological principles into biotechnology, where CSIR has already made major outstanding contributions.
- Dr Girish Sahni, director, Institute of Microbial Technology (IMTECH), Chandigarh

"The joint useful and productive partnership between CSIR and the pharmaceutical industry in the post India Patent Act 1970 era has laid foundation on which was built the active pharmaceutical ingredient (API) manufacturing industry as it exists today."
- Dr YK Hamied, chairman, Cipla

"We at Premas, have had a very fruitful and stimulating relationship with open source drug discovery (OSDD) and CSIR. The journey has been educative and interesting."
- Dr Prabuddha Kundu, executive director, Premas Biotech