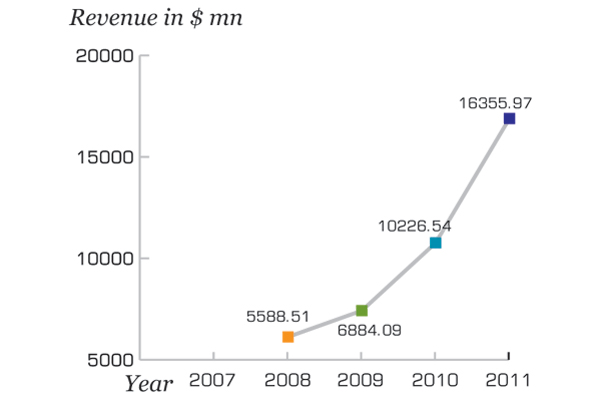 Sinopharm Group recorded the highest growth rate of 60 percent in 2011. The total sales revenue increased from $10.23 billion in 2010 to $16.4 billion in 2011. Sinopharm has already secured a leading position in tier I cities and, in 2011, the group expanded its business in tier II and III cities to reach out to 174 cities. The group is now covering 72.32 percent of all the hospitals in China and is further expanding its pharmaceutical distribution network.

To cover the vast geography of China, Sinopharm improved the investment strategies and followed the policy of synergy to strengthen its control over its target market in the future. The company's next objective is to be "from the first in China to one of the top 500 in the world". For this, the company has launched cooperation projects with internationally well-known pharmaceutical companies.

"As the largest national pharmaceutical distribution network in China, we are facing a complicated and ever-changing external environment. We are in the crucial period of deepening the medical system reform. Over the year, we have been working towards the strategic targets of Sinopharm's 12th Five-Year Plan and, by uniting as one and working hard together, we continued our glorious performance during our 11th Five-Year Plan and maintained a speedy and healthy growth of the group. Sinopharm became the first company in China to achieve a tremendous sales revenue of over $16 billion (RMB100 billion)," said Mr She Lu Lin, chairman, Sinopharm Group.

After achieving the milestone of over $16 billion of sales, the company looks forward to seize the opportunity of rapid development of the pharmaceutical industry of China. In 2011, the profit of the company jumped to 31.26 percent in comparison to 2010.

"Looking forward to 2012, Sinopharm will begin a new starting point of RMB 100 billion of sales and adhere to the strategic 12th Five Year Plan. We will strengthen our core competitiveness by improving our business structures, operating quality, management efficiency and risk management," adds Mr Lin.