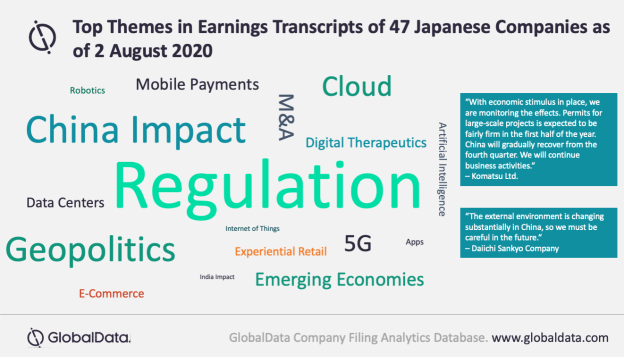 Regulations, China Impact and Geopolitics were the top themes in 2020 for Japanese companies to reduce dependency on China and secure resilient supply chains, according to GlobalData, a leading data and analytics company.

Since April 2020, reportedly 87 companies were to relocate production out of China. Currently, most of the companies in the subsidy list fall under the aerospace and defense, consumer products, chemical, medical and pharmaceutical industries.

Rinaldo Pereira, Senior Analyst at GlobalData, says: “The US-China geopolitical tensions and the COVID-19 pandemic have influenced relations between Japan and China. Japan has currently outlined 30 companies to shift production to Southeast Asia while the rest (57) are to shift to Japan.

“The US-led economic sanctions might affect Japanese firms reliant on Chinese supplies. As a result, several companies are carefully monitoring the situation to avoid Chinese retaliation.”

At the same time, other firms continue to invest in China despite the prospect of receiving subsidies. For instance, Toyota has rejected the government’s production shift offer saying that any instant switch as infeasible due to the complexity of the auto industry’s supply chain.

Other companies such as Komatsu and Takeda Pharmaceutical have reinforced their interest in continuing business operations in China. GlobalData’s Job Analytics Platform identified that the aforementioned companies continued posting jobs in China.

On the other hand, for consumer products company Iris Ohyama, which also manufactures masks, the stimulus package comes as a boon. The company was witnessing increasing labor costs, higher tariffs and regulatory pressures for its Chinese subsidiaries and was among the first companies to use the subsidies to shift to Japan.

Japan’s move to regulate Chinese investment in Japanese firms has resulted in a rise in discussions around regulations as foreign investors have a substantial stake in the stock markets. Furthermore, possible intellectual property regulations may also impact Japanese production locations in China.

Pereira concludes: “Japan is looking to decouple its economy from China while trying to navigate past possible US tariffs. However, with its aging working population, companies are bound to face labor challenges while relocating out of China.”