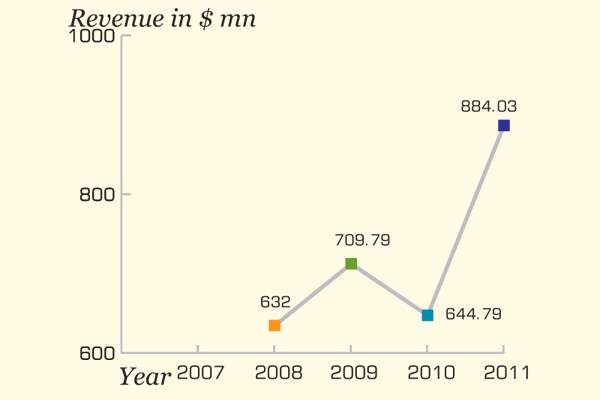 Overall, the company registered a growth of 37 percent in 2011

Sanjiu Medical and Pharmaceutical is a manufacturing and marketing company for medicines, healthcare products, and medical instruments. The company also operates in pharmaceutical trading and medical services, through its subsidiaries.

In the year 2011, Sanjiu Medical marked 24 percent growth in its pharmaceutical business as compared to 2010. The pharmaceutical business, over-the-counter (OTC) drug business and Chinese medicine formulations helped the company to achieve rapid growth despite the presence of a fierce competitive market. OTC business maintained a rapid growth of over 40 percent, skin pharmaceutical revenue sustained a stable growth and paediatric cold medicine was able to hold the momentum of rapid growth, recording an increase of 123 percent. Over all, the company registered a growth of 37 percent in 2011 with revenue touching $884 million when compared to last year's revenue of $664.79 million.
The high prices of raw materials restricted the company's growth performance in Chinese herbal medicines. The company is actively implementing cost management, optimizing business processes and reducing manufacturing costs.

In 2011, Sanjiu Medical invested its resources in new products during first half of the year. In order to ensure implementation of strategic objectives, the company enhanced its infrastructure, implemented technological transformations, increased production capacity, and improved the level of operational control of the production system. Sanjiu Medical expanded its capital expenditure and also advanced its manufacturing base in Shenyang, Jiangxi, Shandong and Beijing. All the manufacturing sites are strongly supported by quality supervision and inspection.

Besides manufacturing, Sanjiu Medical has invested strongly on research and development (R&D), focusing on new products. A total of 36 molecules are currently in the pipeline, six of which have been applied for production licenses, five are under ongoing clinical research and 16 molecules are at pre-clinical stage.