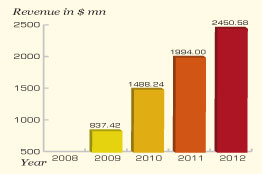 Ranbaxy became the first Indian firm to develop a new drug called Synriam for malaria, which is a health menace that claims half a million lives worldwide each year. In 2012, Ranbaxy managed to lift up the barricade that was put up by US on supplying Atorvastatin tablets. The supply of the drug, which was manufactured at Ranbaxy's Mohali facility was resumed to the US pharmaceutical market.

However, Ranbaxy's generic Atorvastatin, which was launched in November 2011 to manage cholesterol levels, were recalled from the US market after quality issues. The second quarter seemed favourable for Ranbaxy as the company marked a growth of 55 percent over the corresponding quarter in 2011.

In the year 2012, Ranbaxy made geography wide market spread and launched cholesterol lowering generic version of Atorvastatin in Australia and Germany and antidiabetic drug pioglitazone hydrochloride tablets in the US market. Also, the company paved its way into North Africa market by opening a new manufacturing facility in Morocco.

The company also received green signal from Malaysia to set up a Greenfield manufacturing facility, to manufacture dosage forms including tablets and capsules primarily in the cardiovascular, anti diabetic, anti-infective and gastrointestinal segments. Ranbaxy is investing around $40 million in this project to provide employment to over 200 people.