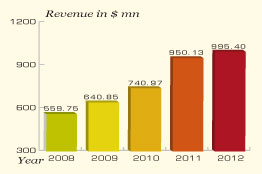 Clocking revenues of $995.40 million, Dong-A pharmaceutical is acknowledged as a leading name in Korea's pharmaceutical industry. Over the years, the company has built alliances with international companies such as Meiji and Bayer to expand its market base. Dong-A is actively seeking in-licensing opportunities.

Strategically moving ahead, Dong-A has also ventured into biosimilars business and the company has also partnered with Japanese firm Meiji Seika Pharma to construct a biosimilars production plant to target the global markets with antibody based drugs, including Herceptin biosimilar. Dong-A Pharmaceutical is working closely with Incheon Free Economic Zone to develop biopharmaceutical industry complex including biosimilar production plant on 145,200 m2 land in Songdo international business district of South Korea.

Dong-A Pharmecutical is marketing its products in approximately 40 countries in Europe, Latin America, and Asia. Besides having a strong base in the South Korean market. It is also engaged in the distribution of pharmaceuticals and medical equipment of other manufacturers to hospitals, clinics, and pharmacies in South Korea.

Dong-A Pharmaceutical is further expanding its footprint into global markets in order to deliver effective and affordable medical therapies. The company is establishing overseas business platform in order to carry out R&D, investment and marketing functions and has an ambitious objective of earning 40 percent of its revenue from foreign sales by 2017.