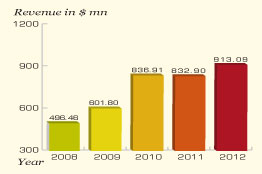 The global life science industry has been facing a financial crunch and The United Laboratories too has felt the jolt. However, the company implemented some strategic moves such as revamping its antibiotic production to meet the increased market demand and recorded consistent growth in sales in 2012.

During the crisis situation, The United Laboratories did not hesitate to invest in resources and made efforts to expand its sales and R&D of recombinant human insulin products at a competitive price. During the year, the company vigorously propelled R&D of new products. The company has currently 47 types of new products that are being developed, of which 10 were approved for patent registration and five are in the process. Furthermore, The United Laboratories completed clinic trials of its third generation insulin products, which has entered into production approval stage.

The United Laboratories adopted new production technology to further strengthen its vertical integration and its Mongolia plant succeeded in producing enzymatic amoxicillin. The plant has an annual output capacity of 10,000 tons.

The United Laboratories has continued to expand its international business and setup full-fledged operation in Brazil, India, Dubai, Indonesia, and Germany, which have contributed an increase of 23.7 percent in export sales, driven mostly by intermediate and bulk medicine. It is not the only international market where The United Laboratories has been leveraging, the company also enhanced its presence in rural markets in China, and has increased its market share by 12.5 percent.