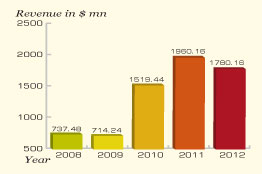 North China Pharmaceutical Company (NCPC) faced a decline of around 26 percent in 2012. The company is principally engaged in the production and distribution of pharmaceuticals and its major products are penicillin, cephalosporin, vitamins, bulk pharmaceuticals, finish preparations and healthcare products, among others.

The company's next aim is to focus on biotechnology products, bio-pesticides and animal products. Utilizing its technological advantages that it has accumulated in the field of traditional fermentation (antibiotics) since 1984, NCPC initiated modern biotech research and set up a biotech drugs development system involving new products R&D, pilot scale and industrialization. NCPC has launched G-CSF, GM-CSF, EPO and genetically engineereed hepatitis B vaccines.

NCPC has established itself as an enterprise with excellent abilities for independent R&D. NCPC is among the first few firms in China to succeed in developing dozen of new products, such as bacitracin, kasugamycin, bleomycin, amphotericin B, lindomycin, clindamycin, clindamycin phosphate and norvancomycin.

The company has set up a separate division for new drug and technology development of the whole NCPC Group. Nearly 300 experts and technicians, advanced instruments and integrated pilot units make it possible to transform laboratory reactions into large-scale production.
In recent years, NCPC has continued to increase its investment on R&D and plans to launch a new set of products every year in the market. Recognized as a generic drug manufacturer, NCPC is also striving to be a novel drugdeveloper.

North China Pharmaceutical Company aims to develop a research platform of its own to make new drugs, using chemical technology and modern biotechnology. NCPC has also collaborated with research institutions in China and aboard to introduce various technical and research resources and has formed innovation alliances with industrial, academic and research organizations.