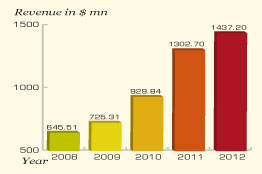 A distinguished name in treating, diagnosing and managing sleep-disordered breathing (SDB) and other respiratory disorders, ResMed continues to increase its effort to build awareness about correlation of untreated SDB and cardiac disease, diabetes, hypertension and obesity. In 2012, ResMed clocked revenue of $1.4 billion, an increase of 10 percent over 2011.

SDB affects around 20 percent of the adult population, making it as widespread as diabetes or asthma. However, low awareness level leads to skipped diagnosis and treatment. In 2012, ResMed released new products across mask and flow generator categories including Quattro FX for Her, Swift FX Bella and Pixi pediatric mask. Additionally, the release of S9 bilevel range of flow generators as well as Stellar 100 and 150 ventilation devices in fiscal 2011, contributed to the increase in its net revenue. ResMed's sleep therapeutic masks, accessories, motors and diagnostic products together accounted for approximately 46 percent of net revenues in the fiscal year 2012.

More than 50 percent of the company's business was driven by the US and European markets and ResMed maintained a steady growth in North and Latin America. However, it witnessed a marginal dip in its Europe market share, which stood at 35 percent in 2012 as compared to 37 percent in 2011. ResMed has also build direct operations in Australia, Hong Kong, Japan, New Zealand, China and India and managed a consistent share of business in the APAC region.

The company believes that an increasing understanding of the morbidity and mortality caused by SDB, has created one of the fastest growing segments of the respiratory industry. ResMed is now positioning itself to meet the growing challenges of this under-penetrated market.