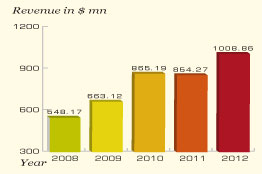 Aurobindo Pharma, ranked among the top pharmaceutical company in India, clocked $1 billion revenue in 2012. Aurobindo has developed its market base in over 125 countries across the globe with more than 70 percent of its revenues drawn from international market. Besides being an established name in semi-synthetic penicillin, it has a strong presence in key therapeutic segments such as neurosciences, cardiovascular, anti-retrovirals, anti-diabetics, gastroenterology and cephalosporins and others.

In 2012, the company consciously revamped its investment in quality management systems, striving to enhance its compliance standards. Taking initiatives to boost the company's growth in sluggish global market, the company launched new products, expanded its geographies with more focus in countries such as Japan, Australia, Brazil, Latin America, Russia, and the Middle East. Aurobindo Pharma has consolidated its R&D base with establishment of its second Center for Chemical Research dedicated to active pharmaceutical ingredient (API) research with additional resources aimed at fortifying its product range and clinical research initiatives.

In 2012, Aurobindo pharma filed 30 ANDAs with US FDA, 267 dossiers inEurope, 33 in South Africa, 16 in Australia and 10 in Canada. Its R&D team reached milestones such as filing for the 150th ANDA approval and receiving the 100th EU approval. Also, during the year, the company filed 36 patents,taking the total to 500.

In the coming years, Aurobindo Pharma seeks to churn profit from its generic products in the developed markets through its strong manufacturing base, authorized by US FDA, MHRA (UK), the WHO, MCC (South Africa), Anvisa (Brazil) for both active pharmaceutical ingredients (APIs) and formulations. According to the company, in the future, Aurobindo's strategy is to work towards profitable growth, focus on high value products, and ramp up its operations with higher utilization of capacities for top 10 products both in APIs and formulations and deliver larger volume of existing products and by commercializing newer products that have received regulatory approvals.

The company plans to refocus on APIs to step up margins, develop markets for its high-value top 10 products both in APIs and formulations and introduce products with high entry-barriers.