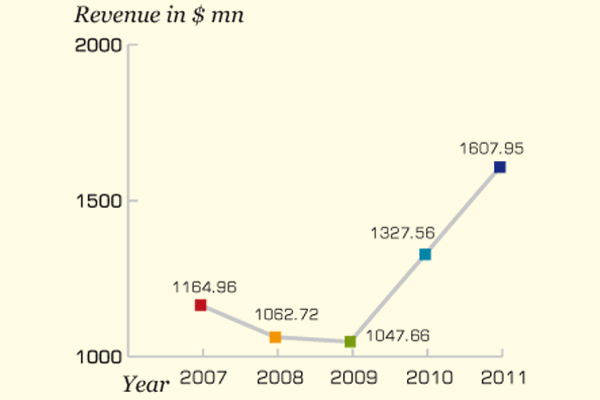 Ranbaxy Laboratories registered a growth of 21 percent in 2011

The year 2011 was a year of capturing potential markets and achieving new milestones. Ranbaxy Laboratories became the first pharmaceutical company of Indian origin to cross a figure of $1.5 billion in sales. Despite facing many regulatory issues in the US, Ranbaxy Laboratories registered a growth of 21 percent with its revenue at $1.61 billion in 2011 against previous year's revenue of $1.33 billion. The year marked significant achievements for the company. It became the first pharmaceutical company from India to have developed an innovative drug, Synriam, for malaria. Ranbaxy also received permission from the Indian drug regulator, Drug Controller General of India (DCGI), in 2011 to manufacture and market the anti-malaria drug in India.

Ranbaxy redesigned its business strategy and decided to develop a smooth path to international regulators. The company received approval from the Food and Drug Administration (FDA) to launch Atorvastatin in the US, the generic version of the world's largest selling cholesterol reducing drug and an effective and affordable alternative to Lipitor. Adhering to FDA guidelines, Ranbaxy made significant investments in improving quality systems and processes in research and development (R&D) and manufacturing operations. The company is now expecting its business to gain momentum in 2012.

One of the strategies that Ranbaxy implemented in its business model to accelerate growth was hybrid business model with its parent company, Daiichi Sankyo. This included synergies in the area of marketing, collaborative projects in bulk drug manufacturing, supply chain efficiencies and joint procurement of raw materials to save costs besides other initiatives to raise manufacturing productivity. In 2011, marketing synergies were initiated in Malaysia, Singapore, and Italy.

Ranbaxy is looking to invest in Africa, which has been a major growth story for the company. The company is also taking measures to be present in different geographies in a big way and the actions are already underway.