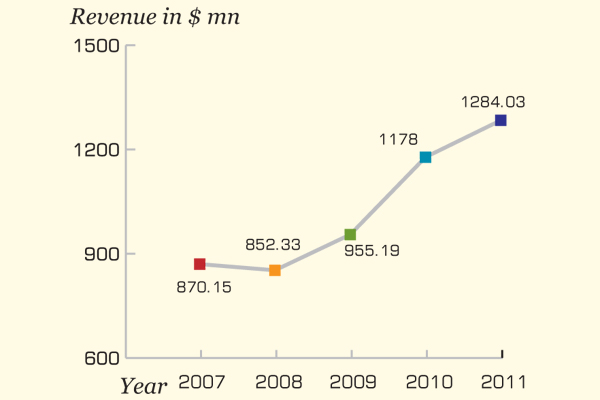 India-headquartered Dr Reddy's Laboratories is making a strong name in biosimilars business in India and in the world. In 2011, the company focused on introducing new biosimilars, reaching out to newer market, and strengthening its research base. The year marked the launch of Cresp in India, the first generic darbepoetin alfa in the world for treating nephrology and oncology indications. Dr. Reddy's also launched Peg-grafeel, an affordable form of pegfilgrastim, which is used to stimulate the bone marrow to fight infection in patients undergoing chemotherapy. The company sold 1.4 million units of its biosimilars, which have treated almost 97,000 patients across 12 countries.

Due to its increased focus on the biosimilars business, the company witnessed a growth of nine percent in 2011, as its revenue stood at $1.28 billion from $1.18 billion in 2010.

Dr. Reddy's ventured into biosimilars three years ago and in a short period of time, the company has made tremendous progress. Its first biosimilar in the world, Reditux, the biosimilar of rituximab used in the treatment of certain lymphomas, leukemia and rheumatoid arthritis, grew by 75 percent in 2010-11, securing its place among the top five brands in India.

Dr. Reddy's formed strategic partnership with GlaxoSmithKline (GSK) and is developing and marketing key products for GSK across emerging markets outside India. GSK products are manufactured by Dr. Reddy's and supplied to GSK in Latin America, Africa, the Middle East, and Asia Pacific. Further strengthening its anti-bacterial segment, the company acquired GSK's penicillin facility in Tennessee, USA that enables it to enter anti-bacterial market segment with products catering to Augmentin and Amoxil.

In 2011, Dr. Reddy's became the only Indian pharmaceutical company to celebrate the 10th anniversary of listing at the New York Stock Exchange. Significant focus of the company in the US market with limited competition harnessed 13 percent increase in revenue from North America in 2010-11. Dr. Reddy's launched 11 new products in US in 2010-11, of which five products experienced limited competition.

Revenues from Russia and Commonwealth of Independent States (CIS) countries grew by 19 percent whereas in Europe, the company faced fall in the market by 13 percent.
The company is targeting a leadership position in global generics and pharmaceuticals services, and in active ingredients business.