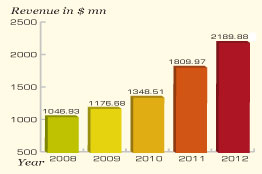 The Yunnan Baiyao Group reported $1.5 billion of business revenue in the first three quarters of 2012, recording a growth of 23.23 percent from the previous year. The firm has been able to maintain the pace of growth throughout the year.

Yunnan Baiyao is developing therapy for minor Recurrent Aphthous Stomatitis (RAS) from herbal extract formulated in toothpaste. RAS is a common recurrent oral disorder with no curative treatment available to date. Headquartered in China's Yunnan province, Yunnan Baiyao is among the 10 key large-scale enterprises in the region and among top 100 enterprises in China. Yunnan Baiyao has already developed a strong base in the Chinese market and the company is now looking to expand its avenues across the globe.

Continuing to achieve quality assurance in pharmaceutical products, Yunnan Baiyao has developed and relocated to its new facility that is designed to comply with required international standards of current good manufacturing practices. In the future, the company is planning to create separate business segments including pharmaceutical products, medical devices, generic drugs and other healthcare products.