RAS: Our kits cost 8-fold less than that of MNC 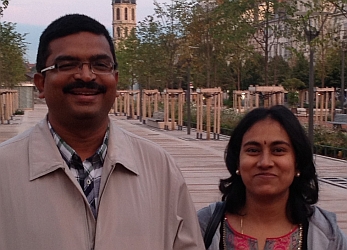 Hyderabad-based RAS Life Sciences has in a span of six years achieved what many bootstrapped start-ups only aspire to. Competing with multinationals and indigenous competitors, while managing the production and sales of its products and services, RAS Life Sciences is a showcase of the indomitable will of its founders.

Their hard work and technical skills paid-off in the form of a license from India's Defence Research and Development Organization (DRDO) to commercialize its swine flu detection kit technology, which is a first in India, and demonstrating value to a French diagnostic giant that bet its money on RAS by picking up 60 percent stake in the company.

They took a personal decision to abandon their respective careers and move to Allahabad to help Dr Anoop Tripathi, brother of Dr Rachna. Dr Anoop was an able pathologist running his own lab and business in Allahabad. The couple spent the following two years in helping and learning from Dr Anoop.

After Dr Anoop's untimely demise at 37 in 2007, Dr Kumar recollects, "There was an option of going for post-doc or furthering the company. We decided on going all-out with furthering the company." So, in February 2008, the company was registered in Allahabad. However, since Allahabad is hardly the place for a biotech company to flourish, the couple decided to move to Hyderabad in mid-2008. Interestingly, the company won the DST Lockheed Martin award in 2009 for LAMP based assays.

The couple, literally, put in everything they had in the company. They sold their assets raising about $50,000 (Rs 2.7 million) to get started. "We were passionate about it and that drove us. In the first month of operation itself we got a contract of about half-a-million rupees. Couple of more projects followed. Being first generation entrepreneurs, we ended-up quoting low price for the projects that we executed," says Dr Kumar.

In spite of that the company clocked a turnover of about $60,000 (Rs 3.8 million). In the second year of operation (2009-10) the company got good projects and also received the Department of Scientific and Industrial Research (DSIR) recognition, which enabled the management to apply for grants.

RAS Life Sciences bagged two Biotechnology Industry Partnership Program (BIPP) projects; one with Institute of Liver and Biliary Science, Delhi, and the other with Revelations Biotech in Hyderabad in 2012. The company's revenue in the second year of operation had shot up to $130,000 (Rs 7.2 million).

By 2011, RAS Life Sciences was making everything required for diagnostics, in-house. And that was a eureka moment for Dr Kumar.
He thought: "If we are doing everything, why not manufacture as well." The company then applied and got license for manufacturing diagnostic kits from the Drug Controller General of India (DCGI).

Dr Kumar says, "There are diagnostics kits from Roche and other MNCs at an exorbitant $290-$380 (Rs 16,000- Rs 21, 000) whereas we offer the same at about $32 (Rs 1,800)." In November 2011, RAS got license for 26 diagnostic products. Apart from that, the company also applied for setting up a FDA-compliant manufacturing unit to make its products and has been allotted a five-acre plot in the biotech park in Hyderabad, Andhra Pradesh.

The investment of $50,000 had already become profitable in just three years, clocking revenues close to $200,000 (Rs 160 million). At that point, RAS Life Sciences' main agenda was to make diagnostic kits, and commercialize in-house products. The company had in 2012 got the approval to commercialize the H1N1 detection kit for which the technology was developed by Defense Research and Development Organization (DRDO).

The kit has a number of advantages over the conventional method of detection H1N1 virus. For example, not only the kit was found to be 95 percent sensitive and 100 percent specific in 1,000 samples tested; it also reduced the time to detect swine flu from eight hours (required by conventional method) to less than an hour. This kit is also eight-times less expensive as compared to the conventional one that costs almost $150 (Rs 8,000) per test. The costs can further go down to $14 per test with bulk orders.

A big opportunity knocked at the door for Dr Kumar and his team in November 2011, when a two-billion-dollar French diagnostic company approached RAS Life Sciences. It wanted to penetrate the molecular diagnostics market in India. The company conducted due diligence on RAS Life Sciences over a period of four months and their kits were evaluated in France. Eventually, the company decided to invest in RAS Life Sciences.

"We are now 30 percent holders and the French company holds 60 percent stake and the other 10 percent is held by Dr Varaprasad Reddy of Shantha Biotech. So, we turned multinational overnight," informs Dr Kumar. This decision was taken in July 2012. RAS would disclose the name of the French company in early 2013 after it fully enters into the international arena. "Now, we will be competing with Roche and other MNCs and so this move is important. The French company brings in instrumentation expertise to completely automate the products. So our technologies combined with theirs will be a complete package," says Dr Kumar recounting the tale of his journey well begun.