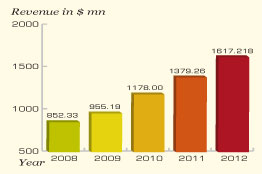 Cipla, which is known for providing affordable drugs to cancer and HIV patients in developing countries, clocked a growth of 17 percent in the year ending 2012. The domestic turnover increased by 14 percent and total exports also jumped by 10 percent. International market continued to be a driving factor for Cipla as more than 53 percent of the total income was attributed to global market. Cipla is further expanding its presence in the inhaler segment in Europe, with regulatory approvals for few products in the process. In the US, the company is exploring avenues by filing its own abbreviated new drug applications.

In the domestic market, Cipla maintained a strong position in various therapeutic segments including respiratory, anti-virals, gynaecology and urology and introduced several new products and dosage forms. Capitalizing on biosimilar opportunities, Cipla is developing biosimilars and biotherapeutic products through its partners in China and expects clinical trials to be completed in the next two-to-three years.

Exhibiting effective capacity utilization at its Indore SEZ factory in India, Cipla gained approval from major international regulatory agencies like US FDA, MHRA (UK), PIC (Germany), MCC (South Africa), TGA (Australia), Department of Health (Canada), Anvisa (Brazil), SIDC (Slovak Republic), Ministry of Health (Kingdom of Saudi Arabia), the Danish Medical Agency and the WHO for several dosage forms and active pharmaceutical ingredient (APIs) manufactured in the site. Cipla is now setting up two additional R&D facilities, which are expected to be operational during 2013. Cipla also made a bold progress by venturing into stem cell-based products and has invested in Bangalore-based Stempeutics.

Launching some innovative products in the market, Cipla has created a dominant presence in preventing the disease burden. Its painless, non-invasive and radiation-free breast scanning technology called the 'No Touch Breast Scan' (NTBS), for detecting breast cancer at an early stage, is already installed in Mumbai hospitals in India and will be available at diagnostic centres and hospitals across the country.