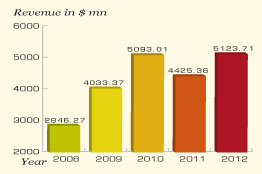 Sinopharm, a dominant name in the distribution of pharmaceutical and healthcare products in China, continues to grab a large chunk of market share and widened its geographical coverage of distribution network. In 2012, China was in the phase of reforming its healthcare system and introduced policies that would continuously advance new good manufacturing practices for pharmaceutical products; lead to the development of county-level public hospitals; and initiate pilot projects for reforming public hospitals in Beijing, Shenzhen and other places. The modifications and advancements in reform policies led the Sinopharma Group to explore new market opportunities and penetrated the market further.

In the year 2012, the company reported a revenue of $21.73 billion, marking a growth of over 30 percent as compared to 2011's revenue. The increase is attributed to the substantial increase in revenue from the group's pharmaceutical distribution, retail pharmacy and other operations.Revenue from pharmaceutical distribution increased by 33.16 percent and accounted for approximately 93.85 percent of the total revenue of the group. Sinopharm's revenue from retail pharmacy increased by 30.80 percent and other business that include pharmaceutical manufacturing witnessed an increase of 13.63 percent.

Sinopharm also expanded its network to 51 distribution centers (secondary distribution center) covering 30 provinces, municipalities and autonomous regions in China through acquisitions and establishments. In addition to continuously secure its leading position in first-tier cities, the group had expanded its business in second and third-tier cities and also achieved total coverage in 180 cities.

The group also sought for development opportunities by integrating market elements, improving operations and enhancing business capabilities and innovations. In 2012, the group strengthened the construction of an integrated logistics platform delivery network covering the whole country. The group has obtained official qualification from a competent pharmaceutical regulatory authority for its logistics services and has also developed a cold chain network across the country to capitalize on the resources.

Sinopharm has rapidly increased its market share and profits in a highly fragmented industry by taking advantage of its nationwide distribution network. The company expects that the domestic market will continue to be driven by rigid demand in 2013, and would sustain a relatively rapid growth rate.