Korea in grip of a deadly measles epidemic 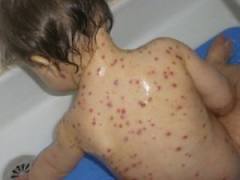 Singapore: Measles in North Korea has turned to be a deadly outbreak in seven years killing three children last week. The contagious disease is spreading fast from the country's capital to other cities.

Despite strict surveillance and preventive measures by the authorities, the disease that broke out in Yongchon in mid-June is now spreading fast to Sinuiju, in North Pyongan Province on the Chinese border.

Korean officials have declared a quarantine for the two areas, halting all train services. Authorities said that lack of vaccination resulted in this massive outbreak of the disease.

Measles is a highly contagious disease that spreads through droplets in the air. Victims develop high fever, rashes and boils around the body. The disease which mostly affects children can be fatal in some cases.