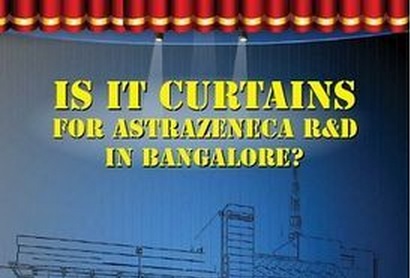 Cognizant Technology Solutions, India's $11 billion and No.2 software company, has reportedly purchased the iconic AstraZeneca Research Laboratory located in Hebbal, Bangalore, on the way to the airport. The 2,00,000 sq ft research laboratory is located in a 10-acre campus with the land alone valued at over Rs 400 crore ($80 million) and the high tech equipment and other research facilities are estimated to be worth another Rs 1,000 crore ($200 million).

Efforts by the Government of Karnataka and the Government of India since January 2014 to salvage the facility and convert it into a BioAccelerator to help startups and educational research centers with access to some of the most sophisticated research equipment in the world have failed.
It is now certain that the planned closure of the Aavishkar R&D Center, which was started 25 years ago and ushered in to some extent India's biotech revolution, will be completed in a few weeks. AstraZeneca had announced in late January 2014 that it was shutting down the center which employed over 170 scientists.

Cognizant's spokesperson, Mr Harsh Kabra, declined to comment on the details of the acquisition or the company's plans to use the research center which has been in the thick of development of a vaccine against tuberculosis among other tropical diseases.
"As announced in January, AstraZeneca will close the Avishkar R&D site and, and as planned, is expected to exit it later this year," informed Mr Vince Docherty, a senior official at the company's global corporate affairs unit based in Hong Kong.

"The decision is part of our broader global business strategy to simplify our R&D footprint and focus resources on three core therapy areas (oncology, cardiovascular, and metabolic diseases, and respiratory, inflammation, and autoimmunity),'' Mr Docherty told BioSpectrum.
There was intense hope that the center will be salvaged somehow. After all, when AstraZeneca shut a similar R&D center in Montreal, Canada, in 2012, the facility was taken over by the local Quebec government and converted into a biotech incubator. In fact, AstraZeneca even donated millions of dollars to run the new center.

In India, no such charitable action took place. The Avishkar site seems to have been sold at the prevailing real estate rates. Representatives of Karnataka government who were in the thick of action to do a Montreal-type deal with AstraZeneca declined to comment on the failed efforts.

Government of India's efforts to take over the center too has not worked. In late June, the Department of Biotechnology (DBT) secretary, Prof K VijayRaghavan, had optimistically stated that "something was being done" when asked specifically about the efforts to keep the Avishkar R&D center afloat. Scientists at C-CAMP, a DBT-funded incubator in Bangalore, had even volunteered to run the Avishakar center if taken over. AstraZeneca had reservations whether any Indian agency had the expertise to run the high-tech facility on its own.

Experts indicate that the land and the facility should be converted into a real estate venture with housing and commercial complexes built there in due course. The R&D center was handling highly contagious biological material such as tuberculosis bacteria in secure containment facilities. Even if the center is shut now, it may take up to 10 years to sanitize the area for human habitation. Recently, a highly advance facility in the US had reported the escape of small pox bacteria due to mishandling and the US government had brought in stringent guidelines for handling such centers now.