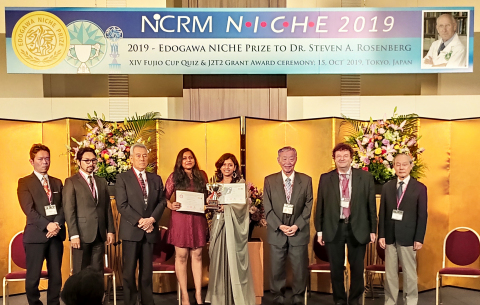 Using the function of the individual's own immune system to combat cancer, this out-of-the-box concept was proposed by Dr. Steven Rosenberg about thirty years ago. His initiative laid the foundation for a new chapter in oncology, inspiring many young scientists and clinicians at the 2019 NCRM NICHE in Tokyo, Japan. His speech at the ETOP Awards ceremony in Edogawa was broadcast live.

According to Dr. Shojiro Katoh, co-sponsor and director of the Edogawa Evolutionary Science Laboratory ( www.eels.tokyo ), NCRM NICHE is an active academic activity started in 2006. Young scholars from all over the world compete for regeneration. The Fujio Cup Quiz (FCQ) in the medical field is evolving into an open innovation platform. He added that FCQ has motivated his team to study 16 different topics in various clinical specialties in the field of regenerative medicine, two of which have completed clinical preclinical studies and achieved successful results, namely corneal endothelial regeneration and urethral stricture repair.

The finalists of the 14th FCQ competition came from Malaysia, Indonesia and India. The winners were Reshma Romanas and Aayurshi Agrahari from the Kasturba School of Medicine in India. The FCQ winners are now eligible to nominate the winners of the Edogawa NICHE Awards, which was established in 2018 to recognize scientists or clinicians who develop new healthcare solutions through interdisciplinary interactions. Dr. Steven A. Rosenberg, Director of Surgery, National Cancer Institute, National Institutes of Health, was the recipient of the award in 2019. According to the organizer, the award portrays an extraordinary example for FCQ winners. The organizer has set up the "Joyce and James Till Travel Awards" with a generous grant from Professor James Till, who has funded the travel of FCQ winners in recent years. These winners are now researchers who have achieved success on their own. They will meet and motivate today's FCQ winners to bring together science and scholars from generations to generations.

NCRM NICHE is supported by a consortium, EELS is a knowledge partner and JBM Inc. is an industry partner. Headquartered in Tokyo, JBM Inc. has established a hybrid cell culture and biomaterials laboratory to promote cell therapy and tissue engineering innovation to the clinic, and future projects will be promoted globally through academic and industry partners with a common philosophy.