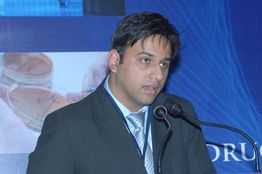 Mr Sahil Kapoor, one of the founders of Novo Informatics, India (winner of the BioSpectrum Asia Pacific Awards 2013 in the Emerging Company of the Year 2013 category)

Novo Informatics is the brainchild of a group of students and researchers from the Indian Institute of Technology (IIT), Delhi, a premier academic institution in India. Mr Sahil Kapoor, Mr Avinash Kumar, Mr Shashank Shekhar and Professor B Jayaram pooled in funds to establish the company drawing on the in-house technologies of IIT-Delhi to discover lead drug molecules against targets.

"We have been working on developing innovative models that speed up the process of discovering lead molecules," says Mr Kapoor, director, co-founder and head of global business operations at Novo Informatics. "We have been providing consultancy to various global companies and academies using our technologies. Also, we are working on creating a compound library that is fast becoming our asset in the wake of incorporation of newer compounds. We believe in discovering a lead soon on our in-house R&D projects."

The first break came in the form of a consultancy to a UK-based company in 2011 for $20,000. Since then, Novo Informatics has been providing consultancy to companies and research institutions in India and abroad. Mr Kapoor says this has helped them sustain in the global market. The company has managed to bag some small projects in India and is in talks with Australia's University of Griffith for a project.

The 10-member team of the company includes promoters, full-time employees and contract employees. "It has been an excellent learning curve. What is satisfying is that we need to constantly evolve to keep up with the technology and the market and thus one has to confront several challenges," says Mr Kapoor, adding that financial contstraint was a challenge at one point. "In time, we understood changing trends in the market and client requirements. We have now taken everything into consideration and are strongly prepared to drive innovation in the coming years."

After a fruitful first year, Novo Informatics tied up with a US-based top research center to provide consultancy which has led the company to discover novel compounds using its technology. The technology was also awarded by a consortium involving the Indian Institute of Management, Ahmedabad, Department of Science and Technology and Economic Times under Power of Ideas 2012. The company, in the same year, also collaborated to stretch the pipeline from compound designing to validations.

Another initiative is the R&D on type II diabetes to discover a lead molecule. The project is funded by the DBT. An oncology platform is also in the pipeline and the company is looking for partners to help in the validation process of the molecules.

The technology
Novo Informatics' technology platform is built on computational biology models that help pharmaceutical companies and research academics in discovering lead molecule against selected targets. Explains Mr Kapoor, "One of our technologies focuses on target modeling (hybrid model) and refinement, and another one is built on modules such as v-HTS and compound optimization. Our USP is a developed compound library, especially designed for selected targets. In addition, modules such as ab-inito protein folding and automated compound optimization would help us stand apart in the market in terms of innovation."

The company hopes to come out with its first product by February 2014. "Our product development is as per our time-line and soon we will launch our first technology that would be on the lines of computational chemistry," says Mr Kapoor. Novo Informatics is now looking to partner with some information technology companies to help finish the product that should take around three-to-four months.

The price, he says, is likely to be below $5,520 (Rs 3 lakh). "Our competitor products are priced at around $70,000 (Rs 40 lakh). Our product will be economical for customers," he adds. The company is targeting academic institutions to sell its product and Mr Kapoor expects to break-even within two to three years.