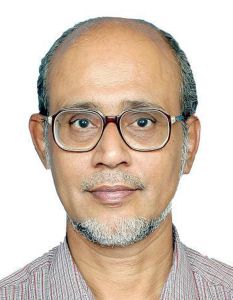 Dr Partha Majumder is a principal investigator representing India in the International Cancer Genome Consortium, focussing on oral cancer as a part of the ICGC activities, particularly the gingivo-buccal cancer. He obtained his PhD in statistics from the Indian Statistical Institute, Kolkata, and is considered an authority on in the field of human genetics.

He is also the director of National Institute of Biomedical Genomics, India; professor at the Indian Institute of Science Education and Research; honorary professor, Jawaharlal Nehru Centre for Advanced Scientific Research; and honorary director, TCG-ISI Centre for Population Genomics, India. He was formerly a research instructor at the Center for Demographic and Population Genetics, University of Texas, US; visiting assistant professor, human genetics and biostatistics, University of Pittsburgh, US; and a genetics consultant, Center for Education and Drug Abuse Research, Western Psychiatric Institute and Clinic, University of Pittsburgh, US.

Dr Majumder, in an exclusive conversation with BioSpectrum, speaks about the present situation of Next Generation Sequencing (NGS) in Asia and how NGS is going to aid in conducting life science research in the region.

What kind of impact is next generation sequencing (NGS) having on biology research, particularly on the life sciences industry in India and the world?

The impact has been stupendous. Firstly it has been able to answer the questions that biologists have sought to answer for decades but have been unable to address because of lack of appropriate technologies. These questions can now be addressed by next generation sequencing (NGS).

Secondly, by the use of NGS, it has become far easier and quicker to map genes for diseases that are due to alterations in one or a few genes. I do not think that NGS has had a major impact on the life-sciences industry yet, either in India or elsewhere, but various information technology companies have begun to specialize in the analyses of massive data sets generated by NGS platforms.

Could you shed some light on the research that you are conducting?

The activities of the TCG-ISI Center for Population Genomics (CpG) has dwindled in the past two years as a result of my taking on the responsibility to establish a new institute of the Government of India - the National Institute of Biomedical Genomics in Kalyani, West Bengal. However, in the preceding five years, there were two main research projects that we had conducted from the CpG pedestal. These included identifying genetic factors underlying the high susceptibility to cardiovascular diseases among the Marwari community, who migrated from Rajasthan about 300 years ago and settled down in Kolkata; and identifying the genetic factors that are responsible for individuals being poorly responsive to vaccines for typhoid and cholera.

What challenges do you face in the field of NGS?

The greatest challenges have been to devise appropriate statistical methods and analytical pipelines to draw valid and generalizable inferences from NGS data; data storage; and prohibitively high costs.

What are your most important concerns associated with NGS?

What are your views on NGS-related R&D, activities and trends in Asia?

How different is the NGS scenario in India as compared to other developed nations like the US?

The scenario is very different in India and the US. Firstly, because the availability of next generation sequencing platforms is still restricted in India as compared to the US and also because of the high cost of running these platforms. The quantum of data generation is much lower in India.

High levels of data generation and analyses provide greater experience in handling such data, resulting in increase in expertise. Further, the community of scientists engaged in next generation sequencing R&D is much smaller in India compared to that in the US. Therefore, there is very little scope of dialogue and argumentation on NGS. This has restricted the development of expertise in India.

What are your future plans?

Our future plans are to continue-to-contribute towards the understanding of genetic factors that are underlying human diseases, especially those that are of public health importance in India.