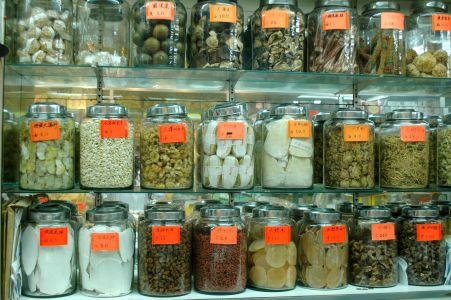 Traditional Chinese Medicine (TCM) is a more than 3,000-year-old medicinal practice whose doctrines are rooted in ancient books such as the Yellow Emperor's Inner Canon and the Treatise on Cold Damage, as well as in cosmological notions like yin-yang and the five phases. Starting in the 1950s, these precepts were modernized in the People's Republic of China so as to integrate many anatomical and pathological notions from scientific medicine.

It comprises a broad range of medicine practices sharing common theoretical concepts and includes various forms of herbal medicine, acupuncture, massage (Tui na), exercise (qigong), and dietary therapy. However, many of its assumptions, including the model of the body, or concept of disease, are not supported by modern evidence-based medicine. TCM diagnosis consists in tracing symptoms to patterns of an underlying disharmony, mainly by palpating the pulse and inspecting the tongue.

About 95 percent of general hospitals in China have traditional medicine departments and formal TCM training is an integral part of the national health program. There are more than 253,233 registered TCM doctors and assistant doctors across the country. According to data published by the Shandong University, hospitals practicing TCM treat more than 200 million out-patients and almost three million in-patients annually.

The popularity of TCM in China can be estimated from the fact that the number of proprietary TCM medicines that featured on the national essential medicines list in 2010 was 102, which is quite substantial as compared to the 205 proprietary Western medicines on the list. Moreover, health insurance schemes cover TCM diagnostic and therapeutic services in China.

TCM has been growing at a pace faster than the average rate of the entire Chinese pharmaceutical industry. The size of the TCM market is estimated to be close to $30 billion. According to the Xinhua News Agency, the cumulative sales value of the TCM industry is increasing at an annual rate of 23 percent.

The Xinhua News Agency reported that China exported traditional Chinese medicine to 164 countries and regions around the world, with export earnings reaching an all-time high of close to $900 million in 2010. The export earnings represented around 16 percent increase from the previous year.

The government expenditure for TCM has increased significantly over the years, and is presently close to $1.5 billion (RMB 8 billion). The share of TCM within total public health expenditure is 6.71 percent, according to Dr Zhang Qi, coordinator of traditional medicine, department for health system governance and service delivery, China.

As traditional Chinese medicine is based on differentiation of symptoms, not everyone will be treated the same way for the same problems. Thus, each person's treatment is personalized. As opposed to traditional western approaches to diagnosing and treating illness, TCM places more emphasis on the pattern of the symptoms involved. TCM is reputed to have the ability to improve a person's general health, is usually less costly than traditional medicine, and is not dependent on pharmaceutical products that very often cause side effects and sometimes require the use of additional pharmaceuticals simply to combat such side effects. These benefits have fueled the popularity of TCM in Asia and in other parts of the world.

Monitoring the quality of TCM products

On a global basis, there have been concerted efforts to monitor quality and regulate the growing business of herbal drugs and traditional medicine. For example, the National Center for Complementary and Alternative Medicine has been inaugurated as the US government's lead agency for scientific research in this arena of medicine. Its mission is to explore complementary and alternative healing practices in the context of science and research. The center is committed to explore and fund all such therapies for which there is sufficient preliminary data, compelling public health need and ethical justifications. Furthermore, the World Health Organization (WHO) has been active in creating strategies, guidelines and standards of botanical medicines.

TCM has been surrounded by a number of controversies. A study published in the Journal of Toxicology and Environmental Health by scientists form the University of Queensland revealed that out of 247 traditional Chinese medicines (TCM) investigated, a proportion were contaminated with arsenic (five-to-15 percent), lead (approximately five percent ), and mercury (approximately 65 percent). Other issues associated with the safety and quality of TCM includes presence of toxic herbs (Aconite poisonings have occurred repeatedly in Australia), microbial organisms, and other contaminants, and deliberate combination or adulteration with pharmaceutical drugs. DNA testing of traditional Chinese medicines has shown that many contain traces of endangered animals, such as such as black bears, tigers, one-horned rhinos, and antelopes among others.

However, advancements in proteomics, genomics, molecular biology and stem cell research have enabled even more research directions for Modern TCM. Moreover, well-conducted research into the mechanism of action of TCM is expected to give it scientific credence.