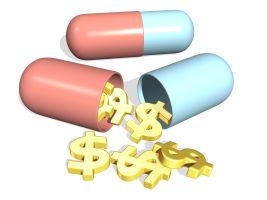 Lipitor, which went off patent in 2011, stayed on top for the fourth consecutive year in BioSpectrum Top 10 Products List of the the Asia Pacific pharmaceutical market. Lipitor recorded a growth of 5.6 percent and increased its sales revenue to $1.06 billion in 2011 from $938 million in 2010 and $806 million in 2009.

Crestor emerged as the second hottest selling drug in Asia Pacific surpassing Plavix, which has been on the second position for the past three years. Crestor boasted of a revenue figure of $579.1 million, registering a growth of 16.8 percent from 2010. Lipitor and Crestor also maintained their top positions in Australia market with revenue of $617.3 million and $363 million, respectively.

Plavix secured the third position in 2011 with a revenue figure of $532.8 million, a decline of 6.7 percent in revenue when compared with 2010. Plavix, an anti-plated medicine developed by Sanofi-aventis, is the only product in the list of top 10 products in the Asia Pacific region that has registered a negative growth during the year.

Lipitor, which is manufactured by Pfizer, is a blockbuster drug prescribed for lowering cholesterol and for reducing the risk of cardio attacks and strokes. Australia, New Zealand and Thailand have been the most promising market for Lipitor, garnering $711 million in 2011. Moreover, Hong Kong, Korea, Malaysia and Taiwan have also emerged as prime consumers of this blockbuster drug and have shown an increase in demand.

AstraZeneca's Crestor has been among the top three pharma products in the Asia Pacific region for the past three years and has reinforced its position with greater sales in 2011. It is prescribed to lower high cholesterol and also to reduce the risk of heart attack and stroke in people without known heart disease. In 2011, Australia surfaced as the main consumer of Crestor, resulting in revenue figures of $363 million in 2011.

Anti-plated medicine Plavix, which is jointly marketed by Bristol-Myers Squibb (BMS) and Sanofi-aventis, is used to treat acute coronary syndrome in patients who are managed medically or through coronary revascularization. The drug has been shown to decrease the rate of cardiovascular death, myocardial infarction, stroke or refractory ischemia.

China continued to be the major revenue earner for Plavix with sales revenue of $253 million in 2011, followed by Thailand with sales figure of $30 million. Hong Kong, Korea, Malaysia, Taiwan, and Vietnam are the other prime markets for Plavix, together accounting for a revenue of $146 million in 2011. Plavix is also the only non-local product that figured in the top 10 list of products in China.

Other products that made it to the top 10 products ranking include AstraZeneca's Nexium, GlaxoSmithKline's Seretide, BMS' Baraclude, Genentech's Lucentis and Herceptin, Eli Lilly's Zyprexa, and Novartis' Glivec. All the top 10 pharma products in the Asia Pacific region boasted of a combined revenue of $98.3 billion in 2011, registering a growth rate of 12.1 percent over 2010.

Baraclude, a medicine for Hepatitis B, claimed the top spot in the Korean market. Hep B is one of the most common serious liver infections in the world and affects a large part of the Korean population. India, which has one of the largest patient pools, saw local products doing well.